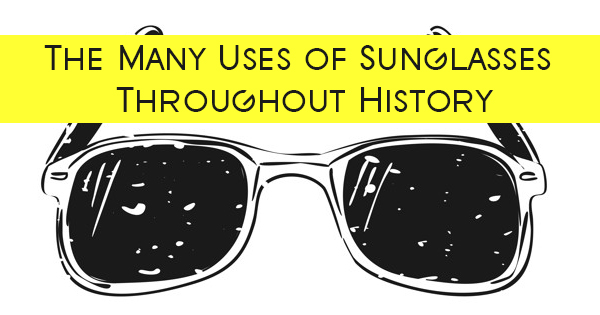 Sunglasses are an everyday part of life for most people. On a sunny morning, most people will grab their sunglasses and toss them on their head right before heading out for the day. Some people even don shades during shady days or at night. Thanks to Oakley and similar brands, sunglasses have become a necessary staple in the fashion industry. Celebrities and high school students alike can be found wearing Oakley M Frame lenses and similar shades.

Though sunglasses are primary used to make fashion statements nowadays, some larger than others, they have been used for much more throughout history.

The first pair of sunglasses were created by 12th-century Chinese developers and were meant to not only protect a person’s eyes from the sun but to hide facial expressions in a court of law. During the prehistoric era, Inuit people would wear flattened walrus ivory goggles with narrow slits in order to block out the sun’s harmful rays.

In 1913, Crookes lenses were introduced, made from glass containing cerium, which helped block ultraviolet light. As more and more people starting wearing sunglasses across the world during the 1920s, shades were primarily used to simply protect from the sun, but they didn’t work nearly as well as today. Older shades equipped with tinted lenses reduced the glare of sunlight, but couldn’t combat high exposure. In order to improve the ability to block the sun’s rays, polarized sunglasses were developed.

The very first pair of polarized shades were created in 1936, when Edwin H. Land combined his skills as a lens crafter and his patented polarized film to construct polarized lenses. At the same time, World War II was just underway and Ray-Ban focused on manufacturing anti-glare aviator style sunglasses so pilots could better see while in the air. Ray-Ban also developed a slightly drooping frame perimeter to maximally shield an aviator’s eyes, which were fixed onto the plane’s instrument panel and, quite often, the sun.

In 2018, everyone from Kim Kardashian and LeBron James to the local mail carrier can be seen wearing all kinds of sunglasses. Sure, Oakley M Frame lenses can be great for style, but they offer excellent UV protection, as well.

...we don't currently have that one in stock
Please add your email and we'll notify you when it's back